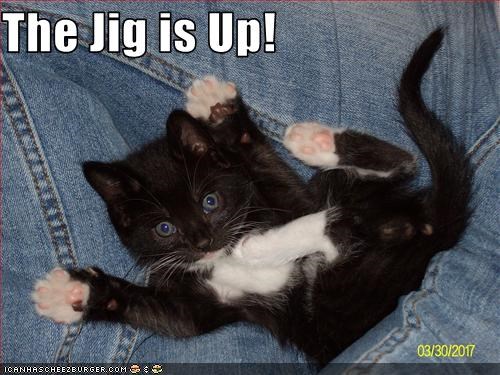 Credit: I Can Has CheezBurger

What “jig” am I referring to? The use of commenting as a link building strategy amongst photographers. More specifically photographers that participate in communities that remove NoFollow from their blogs.

This is referred to by Google as a link scheme, and has been against their guidelines for quite some time. I admit that I’ve participated, and in fact have even hosted a directory, (which is no longer published), that encouraged removing NoFollow from your blogs. I’ve begun to see first hand with clients, whose sites I’ve been unable to rank, the impact of this.

So what happened?  Well, in April 2012, Google released a new algorithm called Penguin. This algorithm was meant to take a hardline on websites that violate their Webmaster Guidelines and Best Practices. Google’s not playing nice with this either. If you’ve been detected as someone that has attempted to manipulate rankings through various linking schemes, the algorithm is set to reduce your rankings so you never see the light of day. You could be stuck back on page 5 or on page 55. Either way, you won’t be getting much in the way of search traffic.

But isn’t commenting on blogs is supposed be good? Yes, actually. Commenting, and adding to the conversation on blogs is really great. It builds community, it contributes to what others are putting up on the Net.
But… What is not OK is to use plugins that remove NoFollow and do link building through Comments.

Why am I saying this now as opposed to 2012? Honestly, when the Penguin algorithm came out, the talk was about eliminating SPAM, and “Link Farms”, and my knee jerk reaction at the time was that commenting on blog posts weren’t “SPAM,” or “Link Farms” and they had to be targeting actual Spammers. After that, I didn’t give it much thought, until recently when I had a client with an incredible existing link profile, and a site that I optimized very well, but could not get to rank for a relatively easy keyword.  I started to do some investigation and asking around, which forced me to investigate and fully understand the Penguin algorithm.

What should people be doing now?

If you’ve been hit with this penalty, be prepared to wait awhile. Because this is an algorithmic change, and not a manual penalty, the algorithm has to be refreshed before the good stuff you’ve done (i.e. removing DoFollow plugins, and having others do the same), will become effective. And it may be a while before the next refresh comes along. But I urge you to think about this as correcting the wrongs we were doing. Ultimately this will be far more beneficial to you and others.

After reading all that, you may be left wondering how you’re going to get ahead in search results, because links are still important, right? Yes, links are still very important. But in this new realm of post-Penguin SEO, it will become really important to understand that Google wants high quality content to serve up in the search engines. You can’t provide something of high quality when you’re focused on trying to “get good rankings.”

The new SEO is about earning links and mentions from others.

It is about earning your place in the rankings by doing what Seth Godin calls being Remarkable (worth remarking to others about). It’s time to think of Google rankings as a side effect to creating unique and wonderful things that should be discovered.

But what if you’re just starting out, or aren’t Jasmine Star or Cliff Mautner? This is where you get to take on your skills, your networking, and all your other abilities to create something that truly is worth remarking to others about.
That may take some time, it may take a lot of creativity, but whether you end up on Google’s front page, I guarantee that you’ve found some incredible clients along the way, and in doing so have probably built a good word-of-mouth following.

Am I advocating not focusing on SEO? No, I still believe SEO and Inbound Marketing is very important. But the way we’ve looked at SEO in the past is definitely changing, and relying on Google as your only source of clients will always result in businesses failing.

I let you all down

I feel that I’ve let my readers down. My number one goal with Flaunt Your Site is to connect you, and you self-expression and photographic artistry, to the world. And while I believe in doing the right thing, and practicing white hat SEO,  I screwed up andperpetuated a practice (that was on the gray-hat side of things in the first place), but is now considered black-hat. This absolutely goes against what Flaunt Your Site is founded upon, and I hope you all can forgive myself and the ignorance that I was operating under for quite some time.

I understand that many of you look up to what I say, and I promise you all that the advice and the practices we do here at Flaunt Your Site will be consistent with Google’s Guidelines and Best Practices.